July 20, 2018
GUADEC 2018 has come and gone, and with this being my first FOSS event I have a number of thoughts about what I was expecting and what I'm coming away feeling. This is part 1 of a multiple episode recount of my GUADEC 2018 experience.

How exactly did I get here? The lead up to GUADEC was fast-paced enough to give someone whiplash. Up until a few short weeks prior to GUADEC's commencement I was just a simple GNOME user.

A month or so before GUADEC, the timing being totally coincidental, I tweeted Nuritzi, a person whose name I had just learned after seeing the GitLab + GNOME announcement video, asking her if she would be willing to speak on her perspectives in tech at my University. Being the President of the GNOME Foundation board of directors, I wasn't really expecting an answer to be honest. However, not only did she answer my tweet, she and I had a short phone call later the next day, and the next thing I knew I was on the GNOME Engagement Telegram talking to Sri and Rosanna about what I could do to help the cause - Nuritzi is VERY persuasive.

I kid you not, in less than three days I went from being a passive observer of FOSS technology to being fully roped into having assigned tasks on the Engagement team for both myself and my graphic designer girlfriend, Caroline.

To make a short story even shorter, very soon (seriously, like two days) after 'joining' the Engagement team, i.e. having them assign me tasks and doing them as best as I knew how, Nuritzi started to put the pressure on myself and Caroline to attend GUADEC. Now, this seemed like such a longshot it was laughable. It was just about three weeks until GUADEC began, I had no hard affiliation with GNOME yet, and I assumed it would be impossible to arrange my travel in that short amount of time. And to make things even more complicated, I had an academic conference the very next week following GUADEC that I had to somehow try to not overlap with. This just ain't 'gonna happen, I thought - except that it VERY much did.

A couple days after putting in my request for travel sponsorship, which I didn't even think I qualified for not being a GNOME member, I was fully approved for the amount that I had asked! So ok ... now I'm stuck. I have to try to find travel and room accommodations to get me to Almería, Spain in just over two weeks. Well, after some digging and life-hackery, I got myself booked on Norwegian airlines to Barcelona with a connection the following day to Almería (with the reverse trip booked as well).

Caroline, sadly wasn't able to get the time off work to attend, having taking the following week off to come with me to my other conference. Though next year this will change, and she and I will both be in attendance.

While booked through Norwegian, my flight was actually contracted out to Hi-Fly, a portuguese based company, and while not glamorous or really very comfortable, it got me there and back safe and sound, so there's that.

Barcelona was incredible! The food, the language, the beer, I was hooked. This being my very first trip to Europe, I went full tourist mode and took photos of everything. 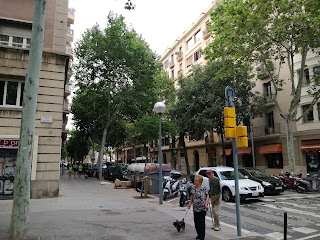 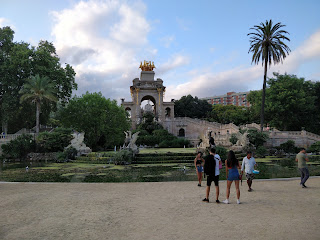 Likewise, flying into Almería was pretty uneventful and easy, and I got to Almería right as the afternoon talks on the first day of GUADEC were taking place. At the airport I ran into Georges, with whom I hadn't met prior, though while standing outside alone he sought me out as he said that I "looked like I belonged with GNOME", whatever that means, and he and I shared a cab directly to the university.

To call myself a 'fish-out-of-water' would be an understatement. I didn't know anyone. I had talked to Sri and Rosanna a few times in chat, and I had talked on the phone to Nuritzi, but besides that everyone was a complete stranger. Nuritzi quickly found me and funneled me into Rosanna's Foundation talk, and I think something in that room kinda clicked. I'm not sure what it was, but I felt comfortable - comfortable enough to immediately start asking spearheaded questions during the talks, which albeit isn't too out of character for me, and it felt really awesome to be surrounded by people who all shared the same interests in FOSS and technology as I did. Honestly, it was somewhat refreshing being the least knowledgeable person in the room regarding FOSS, which in my field of Neuroscience is all too rare, sadly.

The rest of that first day went as smoothly as I'd hoped. I met up with a few people at the check-in table and got myself all checked in. (Though it was super hard because the computer was acting up, and was in some strange Spanish + Dvorak + KDE layout that nobody knew how to type on.) I met a scary, yet super cool person named Kat, who, after I put on the notorious 'red shirt', started giving me tasks to do right away, most of which I think I failed pretty miserably. And I met a gentleman named Steve who asked me directions on where to find a specific building, to which I was almost entirely useless in helping him find. All good things so far.

Though it wasn't until that evening, the night of the welcome dinner and beach party, that I felt like I truly belonged. I got to talk to TONS of awesome people. Nate told me all about the state of typography and Linux, I learned all about Debian and met some cool Czech folks from RedHat, and funnily enough, I found out that there was ANOTHER Neuroscientist at the conference. I also got to talk about the nitty gritty details of properly cooked American barbeque with a Bavarian gentleman - it honestly felt like family by this point - also, the beer and food were dope. 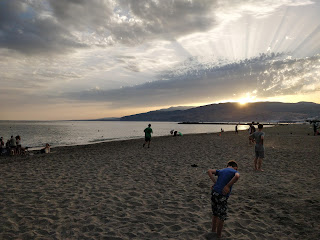 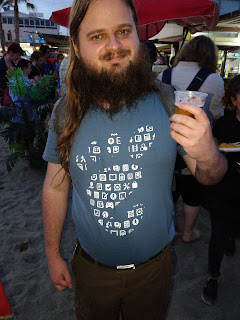 I think a big aspect of GUADEC for me was trying to find my place and my voice. It's pretty rare for me to be so far out on a limb, but for GNOME and for this opportunity I was willing to make it work.

The talks were all extremely interesting to attend. The way that they had organized the talks was that there was always a technical talk in one room and a semi-less technical talk in the other. I definitely was much more locked-in with the less technical talks, though I did venture to listen to a couple of the more low-level talks, and even then I still felt really engaged. Further, each day they would have a vote for a flexible set of talks that would take up the last two time slots in each room, and these ranged from VERY funny to being totally awesome, or some weird combination of both.

Likewise, the social events got off to a super strong start with the beach party, but somehow they managed to even 1+ themselves night after night. More on that to follow in Part 2.

September 11, 2019
Again, I'm late with this post, but with work, travel, and GUADEC my life has been a bit of a whirlwind of late. But here it is, my thoughts on West Coast Hackfest and the work that myself and the Engagement Team did during that time. Firstly, I'd like to thank the GNOME Foundation and the Travel Committee for approving my travel to this event. This was my first official hackfest as part of the GNOME Foundation, so it was a pretty big deal for me to attend. The event was hosted at a local communal work space, and we were able to get both halves of their conference room for the full 3 days of the event. This venue was extremely nice and pleasant to work in, and many of the people who work in the building stopped in to let us know that they were fans of what we were doing and knew all about GNOME and the Foundation. Productivity wise, I think the atmosphere and professionalism of the venue lent itself to us all getting work done efficiently. During the first day, t
Post a Comment
Read more